Running is a fairly important part of my life. I’ve missed the organized races that I was regularly taking part in, and which is the subject of my song ‘One Foot in Front of the Other.’ Those races are coming back and I’m currently training for two trail runs. The big one I’m doing is the Ragnar Relay in Tampa Bay Florida. A friend of mine from Montreal lives there now and we are one person shy of a complete team of 8! I’ve never run a relay before, and this one seems to be a little different in that, instead of travelling in a van, we just camp in the middle of all the loops, which is really my kind of activity! I’m really looking forward to this challenge. It’s a little longer than a half marathon distance, run in three stretches.

I always like to have a warm up before a big run, so I’m running a local 8k trail race in October as part of my prep.

Another of my running friends informs me that relays were her gateway to Ultra Running. I’m not ready for ultra yet, but I’m 42 this year, and I feel it’s time for my first Marathon. I’m eyeballing the Canadian courses happening in the spring. It does feel very good to have races back on the calendar!

Here is a photo is from the first race I ever ran. It was a 5k santa shuffle in Parc Mont-Royal in Montreal. I’m more about endurance than speed, so I haven’t run many 5ks since, but it was a great way to get started. I focused mainly on being relaxed during the race and ran way faster than any of my training sessions. I discussed it with an Alexander Technique teacher I’d been working with, and he said that by relaxing I’d taken the breaks off. This is also what helps us shred up a guitar neck. It was December, which I feel is kind of fitting for my first race. I really do love a cold weather run. 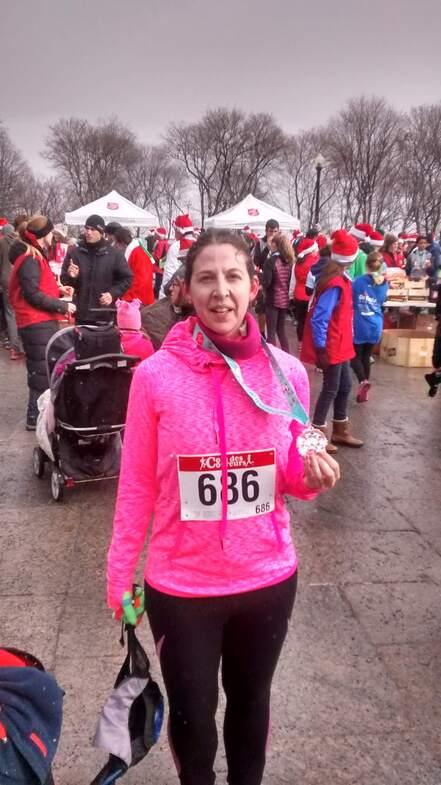 This was from a 10K one year in May. It was the Shoppers Drug Mart Run for Women. I am not a fast runner, but I had set myself a time goal for this race, and I achieved it. I had asked someone to take my picture in front of the sign at the Run for Women and he encouraged me to look happy and excited that I just ran a race. 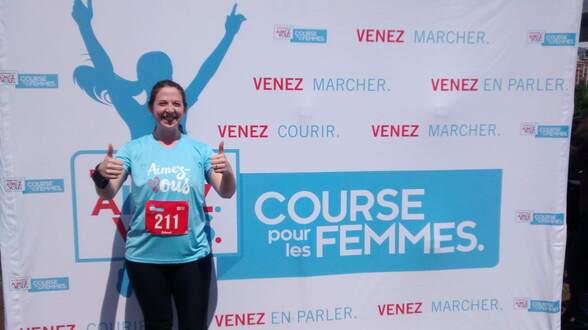 Finally, the chorus of my song talks about lying in the grass. Here’s me, lying in the grass, after running a half-marathon in a heat wave. That was a really cool marathon. The Montreal Marathon, aka the Oasis Rock n’ Roll marathon. I had gone to cheer on my cousin there a year or two before, and that was really what kicked off my finally taking that step to sign up for a race. They had stages set up with bands playing along the course. Our running bibs had a beer ticket attached to them, and Canadian 90s rockers Moist were playing the main stage in Parc Lafontaine. They had cancelled the full marathon that year, and moved the start time up an hour, so I think I was up at around 5am to have breakfast, and get down to Parc Jean Drapeau for the start of the race. Along with the bands, they hand fire crews with hoses set up along the route to keep people cooled down. I was worried about loosing my sun screen, so I didn’t run through the water, but I took a lot of precautions to keep myself safe from the heat and I felt great the whole 21km. The other anomaly of the day was that my husband had left for 3 months in New York that morning, so after the race I just hunkered down on my own and enjoyed the show. The sound was really good, and Moist are a very tight band. I had thought I’d just finish my beer, hear a couple songs and go home, but I stayed for the whole concert.

Here’s me lying in the grass after they hung a medal round my neck, recorded my time, took my picture, and gave me a protein shake and a banana! 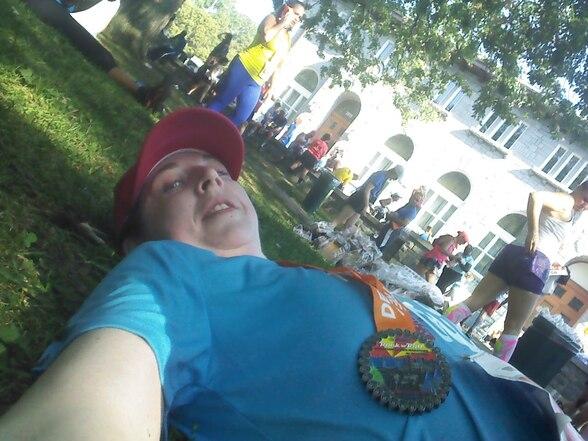